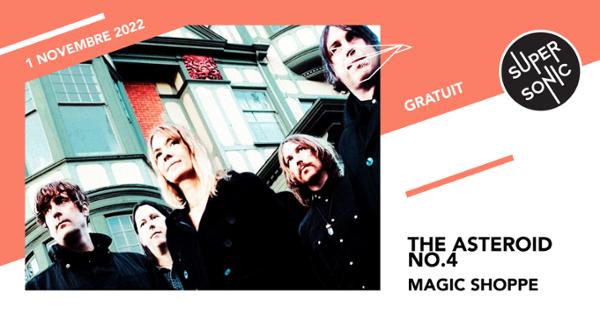 THE ASTEROID NO.4
(Dream pop – San Francisco, USA)
The Asteroid No.4 are an American psychedelic band based in the San Francisco Bay Area. Originating from Philadelphia in the latter half of the 1990s, the band began their relocation to the west coast in 2011.
Since forming, the band has endured several lineup changes. Over the last ten years, however, they have consistently included Scott Vitt (vocals, guitar), Eric Harms (guitar), Matty Rhodes (bass, vocals). Most recently the band has added Mark Tarlton (drums) and Camilla Saufley (keys, guitar, vocals)
The band is known for their dynamic live act, integrating multi-textured guitars and reverb-drenched vocal harmonies over an unwavering rhythm section. However, it’s been their prolific recording output, including what will soon be their ninth full-length album, that’s helped build their dedicated fan base within the flourishing underground psychedelic scene. With well over a dozen compilation appearances, digital-only rarity releases, and multiple singles and EPs, the band is said to improve with each release.
https://theasteroidno4.bandcamp.com/
https://www.youtube.com/watch?v=Sn9fJ8uDaiE