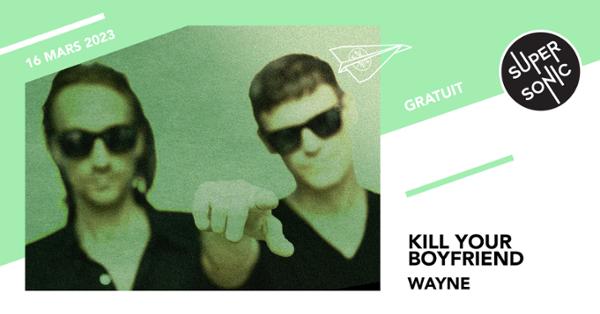 KILL YOUR BOYFRIEND
(Cold punk – Treviso, ITA)
Kill Your Boyfriend is a two-piece Psych tinged, Post-Punk Industrial Rock&Roll band formed in Treviso, Italy, in 2011. They are singer-guitarist Matteo Scarpa, standing somewhere in between a doomsday teller and a possessed Rockabilly shouter; and drummer Antonio Angeli, who perfectly sets the frantic and tachycardic pace for the Noir and Post-Industrial tales of his partner in crime.
They released 3 albums, several singles and EPs, including a 10” split with fellow Venetians New Candys in 2015. In 2019 they released the highly praised album ‘Killadelica’ via Sister 9 Recordings (UK), Little Clouds Records (US) and Shyrec (Italy). They have performed extensively across Europe, sharing stages with Zola Jesus, KVB, Civil Civic, Preoccupations and Zu.
https://killyourboyfriend.bandcamp.com/
https://www.youtube.com/watch?v=PL0AnsnnoxY

WAYNE
(Shlaggaze – Paris, FR)
Wayne already had multiple musical lives. Born in 2015 Wayne has released 5 EPs. We wander through her music as we would explore a forest of reverbed voices, blending with guitars drowned in effects. Wayne’s tones are like a coat of mist that won’t go away. As she spreads her shamanic pop, not too far away from shoegaze, Wayne is most certainly ready to take off.
https://sendwaynesomelove.bandcamp.com/