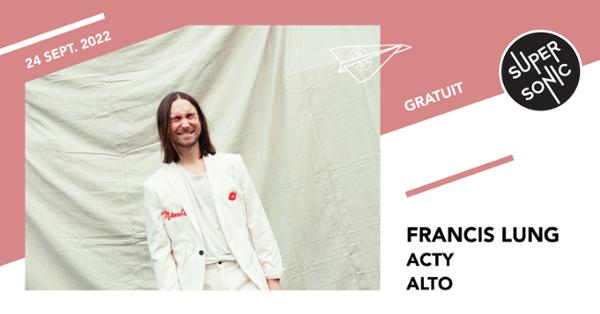 FRANCIS LUNG
(Indie folk – UK)
FRANCIS LUNG
Announces ‘Short Stories’ EP launch party at Supersonic in Paris on Saturday 24th September.
‘Short Stories’ Out 23 September via Memphis Industries
New single ‘2p Machine’ out now – https://www.youtube.com/watch?v=4ozMYmm4Ffg
Mancunian singer songwriter Francis Lung returns this Autumn with a new six track EP “Short Stories” on Memphis Industries. It’s the follow up to his much heralded 2021 album ‘Miracle’, a tour du force in melodicism, as witnessed on Francis’ 6 Music playlisted single Bad Hair Day.
First taster from the “Short Stories” EP is “2p Machine” which demonstrates similar songwriting flare whilst at the same time pivoting to a more narrative style with a distinct Northern English sensibility.
The past year has seen two big life changes for Francis – a move to France, specifically Nantes – with wife and collaborator Coralie and the birth of their daughter. Both had significant impact on the songs that appear on “Short Stories”, as Francis explains:
‘Those first months following the birth of my daughter were a daze – the days were joyful, but the nights were long. Once I’m up, I’m up, and I could never get back to sleep after feeding or changing the baby. In my semi-delirious state I would lie awake in bed making up stories in my head to pass the time. ‘2p Machine’ was the first of these, which originated from memories of being a kid on holiday in the arcades on Blackpool pleasure beach’.
The narrative of ‘2p Machine’ follows ‘Sasha’, a young Stevie Nicks fan with a penchant for gambling away her pocket money on the arcade machines. But her goal of winning as many ‘blood red tokens’ as possible isn’t driven by a desire to swap them for toys at the ticket exchange, it is instead part of a naïve plan to try and buy the un-buyable – a friend. “It’s a story about alienation and how our imaginations have the power to save us from loneliness, at least temporarily” Francis says. The arc of this tragicomedy, in which the protagonist utilises fantasy to try and escape a harsh reality, is indicative of the tone on the rest of ‘Short Stories’.
“Short Stories” was written, played and produced entirely by Francis, a first for him, in his spare bedroom studio following his move to Nantes. The move to France gave him a new perspective on, and certain reverence towards, life back in Manchester, which made its way into his songwriting. The accent, the dark sense of humour, the matter-of-factness and general mood of the songs on “Short Stories” are evidence of this. Says Francis, “It’s a celebration of where I come from but it’s also taking the piss. This in itself is a pretty Mancunian outlook I think’
https://francislung.bandcamp.com/
https://www.youtube.com/watch?v=4ozMYmm4Ffg

ACTY
(Alternative rock – Mexico)
Born in state of Hidalgo, México in 2015. Amparo Carmen Teresa Yolanda is a band whose music plays tribute to the literature trough their lyrics and whose sounds creat music atmospheres full of shoegaze, Kraut, noise and post punk.So far they have released one EP and two albums.They have played in many stages in Mexico next to national and international bands. They were part of ¨Fesrival Hipnosis 2021″ where they played next to bands such as LA FEMME, MONOLORD; SUGAR CANDY MOUNTAINS, FUZZ ETC. In 2022 were part of the Mexicadelia festival, along with Weed, Lorelle Meets the Obsolete and more. They will currently tour Spain, Belgium and France.
https://actyoficial.bandcamp.com/
https://www.youtube.com/watch?v=4RCRC5qcio4&t=39s