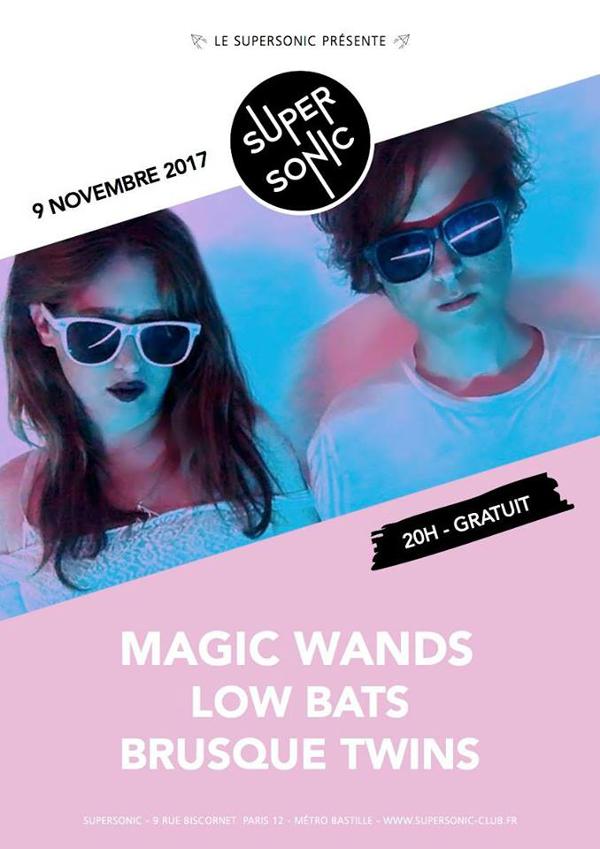 Magic Wands is a dream pop duo from Nashville,Tennessee and currently reside in Los Angeles California. They are best known for their melodic, catchy tunes ‘Black Magic’, ‘Kaleidoscope Hearts’ and ‘Teenage Love’. These songs off their 2012 debut album ‘Aloha Moon’ landed them playing live on BBC1 Radio, being remixed by The XX and Crystal Fighters plus sharing bills with The Horrors, The Black Keys, The Kills and The Jesus and Mary Chain.

Chris and Dexy Valentine create music that centers on their main influences – the love of all things: magic, love and dreams. In 2016 they released their second album « Jupiter » which was described as « mixing elements of gothy post-punk and ethereal psych” by Brooklyn Vegan. In anticipation of their third album ‘Realms’ Magic Wands are bringing their dreampop sound to the UK and Europe this fall.

Brusque Twins is Hollie Hensman and Derek Evan George. The duo started working with synths and software after moving to Montreal in 2009. By 2011, they had released several tracks online that received international attention from music blogs. The same year, they released their first EP ‘Cliff Dweller’ on local label Visage Musique, which they co-founded, and began playing live shows in the burgeoning Montreal synth scene.
They opened for bands Black Marble, Kontravoi