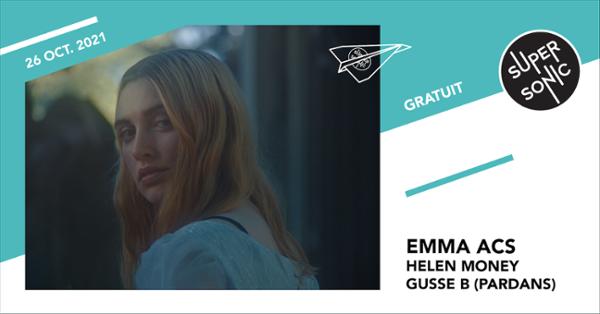 EMMA ACS
(Dark folk – Third Coming Records – Copenhagen, DNK)
Emma Acs’s new EP “While I Shoot From My Fortress of Delusions” marks a rupture. Both musically, in the way the songwriter have created her darkest and most experimental work yet, but also personally when you pay attention to the nature of the songs. They arises from an end of a relationship, which seems to have released a manic strength in Emma. Instead of searching for inspiration where her roots are, which in undeniably in rock music, Emma was deeply drawn to the anger and agression in hip hop and chaotic experimental techno-like music.
– https://emmaacs.bandcamp.com/
– https://www.youtube.com/watch?v=x7UmgF2SABM

HELEN MONEY
(Dark folk – Thrill Jockey Records – Chicago, USA)
Alison Chesley, known also by her stage name Helen cMoney, is a classically trained cellist who draws her inspiration not only from Pablo Casals and Shostakovich but Jimi Hendrix and The Minutemen. Helen Money is equally at home in the New Music realm as she is in the New Metal realm. She has toured extensively with an incredible array of musicians, including Shellac, Neurosis, Sleep, Russian Circles, Magma, Agalloch, Earth, and Nina Nastasia. Both Portishead and Shellac selected her for their respective All Tomorrow’s Parties festivals.
– https://helenmoney.bandcamp.com
– https://www.youtube.com/watch?v=gxy9MVej5BI

GUSSE B from Pardans
(Human music – Copenhagen, DNK)
Coming out of the Copenhagen experimental scene Gusse B presented the debut album « Margara » in June. Previously known as the mad figure fronting the genre-bending rock band Pardans, Gusse appears more calm this time, the music less aggressive and frontal, yet still entertaining. The songs tell stories of love and loss in a near future sci-fi. In this world the flood has already rolled in over the cities and the off-world migration is in full effect.
There are guitars, patchworking at the periphery and epic flying mounts.
Drawn back skies, deep smoke fades. A sense of headroom, floating landscapes.